Are we living in the Golden Age of Geekdom? 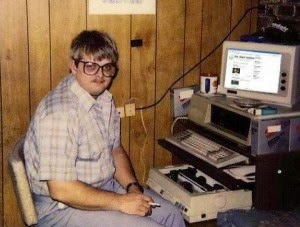 Are we living in the Golden Age of Geekdom?

Not too long ago when someone mentioned the word “Geek”, this images like the one above came to mind.
Nowadays, when someone talks about geeks or you were to search up the term, pictures like this appear: Before I go further, I want to inform you that my goal here is not to ramble on about how there are now “Fake geeks” or “Posers” and how we should rally to exclude them from various of our geeky gatherings. But rather I am here to talk about how incredible it is that our borderline obsessive love for various fandoms has now become widely accepted rather than frowned upon.

This is me, DeAngelo. I am currently 23 years old and have a huge love for all things geek. From Warhammmer 40k to D&D to World of Warcraft and so much more. Growing up, I did what every little geek did and watched Star Wars 50 times a day whenever Dragon Ball Z and power rnagers were not on. In my spare time I played games like Pokemon(Go Red version!) Legend of Zelda Ocarina of Time, Metal Gear Solid, Golden Sun and so many other games.
My peers, even at such a young age looked on in judgement and labeled me not worth talking to for many years. That was until Harry Potter, Lord of the Rings and various Super Hero films emerged causing all kids across he world to embrace fantastic fictional worlds. Soon those same peers that casted judgement on me soon turned into cherished friends by engaging in recess conversation about various theories regarding the end to Harry Potter or if Gandalf could defeat Dumbledore in a wizard duel. It was from this moment on that opened the flood gates for all things geeky and hardly anyone could be found bullying another kid for loving Dragon Ball Z or Yu gi oh. That was because everyone was doing it.

Girls who uttered the words “Star Wars is dumb” or “I hated Lord of the Rings” were usually met with this reaction:

Even when our childhood transitioned into our teenage years and hormones kicked in, a large majority of people did not abandon their geekiness. In fact, it got worse due to a little game called World of Warcraft. I kid you not, most of my High school played. We would spend our school days talking amongest each other about ways to improve our Damage Per Second, Heals and ability to tank that way when we left school for home, we could hop on and be that much more efficient.

Moving onto my college years I found that a number of my peers had dropped off their love for all things geek in an attempt to appear more attractive in the eyes of the opposite sex. Which I found very silly because I never hide my love for things. (Granted I also went tot he prom alone so I can understand 😛 ) However if there is one thing I have learned in my 23 years of life is this: Everyone, everywhere is a geek. It may be a tiny hidden guilty pleasure or the highlight of their life but everyone is a geek in one way or another. And the way I made friends was by finding out what they loved and exposing it. In just a few conversation I could get them to come out of their shell and tell me all about how much passion they had for whatever fandom. (Guys was Dragon Ball Z and girls were usually Harry Potter) For Example…

This is Genna.  She graduated from the University of Phoenix with a degree in Business, is the head manager of a team of Account Managers that service over 600+ small business owners across North America. If there is a problem, she jumps in the fray to see it gets fixed. Her work week consists of well over 60+ hours of hard work. The reason I know so much is because, well, she is my boss and also one of my closest friends. When I first met Genna, the word ‘Geek’ had been furthest from my mind. That was until she casually mentioned one day how she loved the Kingdom Hearts series, was a huge fan of Harry Potter and had gone to comic con quite a few times, absolutely loves board games and is still the reigning champ of Mario Kart in her family.

This is Mauro. Tall. Dark. Handsome. Charming. Modest.  Pretty much the kind of guy every girl dreams about having. Best part is that he is the furthest thing from being a jerk. Mauro is a great guy! When we first met I had no idea who he was and was generally pretty jealous because I knew that if I stood next to him, all of the females in a 20 mile radius would flock to him and ignore me.  Did I mention he is also a photographer? Not just a mediocre one either but a good one!   I would have never imagined him to be a geek when he had so many women fighting over him. Yet he was actually very humbled to meet me. Upon our first encounter he informed me of how much he wanted to be apart of my Dungeons and Dragons group as well as play with me on various video games. He also introduced me to quite a few Animes. (As well as advice on women)

This is Wendy.
Smart. Fun. Kind. Pretty.
I actually went to high school with Wendy for all four years. I honestly do not believe that we ever exchanged words once during that time. Not because of any ill will from either party but more so that life pulled us in different directions and different friends. From what I could tell was that Wendy was incredibly hard working, driven, kind and very smart. Most of the time I saw Wendy was either out at High school foot ball games or on stage for a theater performance.
It wasn’t until long after we got out of school that I actually got to know her.  We added each other  on Facebook and I would see her posts from time to time and one day I stumbled upon a post from her which displayed her excitement for the next Dead Island installment, Riptide.
Needless to say I was stunned by what I read for never in a million years did I think that Wendy would ever be excited for the launch of a video game, let alone a franchise that I too love! We chatted about the game and she revealed that she actually carried a huge passion for a number of geeky things including Harry potter (Which she made sure I added how she had attended every single midnight premiers for both the films and books.)
Wendy has graduated from ASU, is a first grade teacher and has even won her first of no doubt many awards for her stellar performance.
All three of these wonderful human beings are my cherished friends. I pride myself on having a great judge of character and I knew they were good people, however they completely slipped under my Geek-radar. I had no idea they were fellow geeks and if I did not, I am quite sure others have yet to discover this as well.
As I said before, everyone is a geek to a certain extent about something.
Thankfully we live in a day and age where we can enjoy our different passions openly and express them to others with hardly any fear of judgement.

We can live The Geek Lyfe