The Disaster Artist is Equal Parts Heartwarming and Bizarre 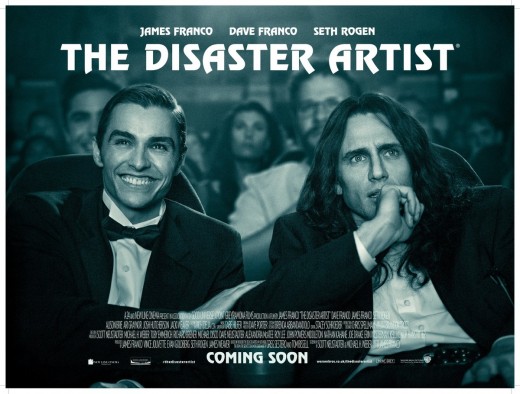 My obsession with delightfully horrid movies knows no bounds (I have several gigs worth of strange indie films on my laptop). Beyond merely viewing them, I want to learn everything I can about the events and people that led to their existence. With this in mind, it’s no surprise that I read The Disaster Artist, Greg Sestero’s book about his unlikely bromance with the mysterious Tommy Wiseau, and the making of The Room (which is often dubbed the worst movie ever made). It’s also no surprise that I used 50% of my remaining funds for the week to go see the film adaptation of The Disaster Artist, starring James and Dave Franco. My overall impressions of the movie are as follows:

1. I wish it had been a mini-series because the book was fantastic and would have easily translated into a handful of delightfully detailed hour-long episodes. I feel this way because a lot of really good shit from the book was omitted from the movie, but such is the problem with film adaptations. 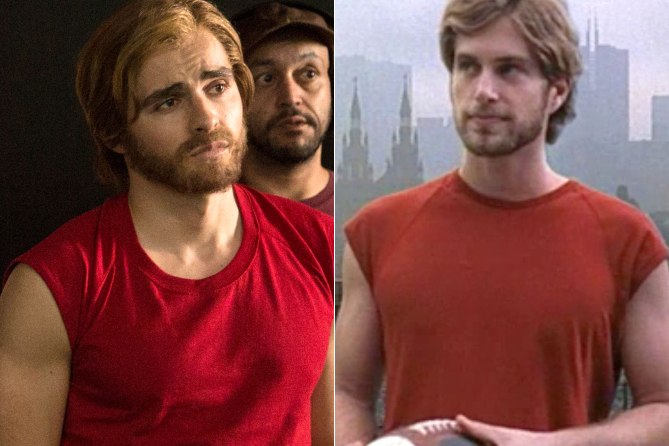 On the Left: Dave Franco as Greg (playing Mark) On the Right: Greg Sestero playing Mark
They’re both really cute.

3. Alright, this one is gonna be longer, so bear with me. I feel like the reason Tommy Wiseau claims that he likes the movie more than the book it’s based on is because it casts him in a far more favorable light (at least in the first half of the film). Having just finished The Disaster Artist book a few days before I saw the film, I can definitely say that the book had a different tone. It wasn’t a negative or bad, one; it was just that we saw a lot more of Tommy’s less pleasant habits and attributes in the book. For example, it’s mentioned in the book that he was often dramatic and unnecessarily rude in his treatment of waitstaff when he and Greg were at restaurants. It’s also mentioned that he would argue with cashiers for “American discounts” at stores. I feel like this would have made the fact that he actually bought film equipment instead of renting it that much more amusing. In addition, much of the apprehension Greg had about Tommy and playing Mark in The Room is missing from the film entirely. Not only that, but Tommy does some pretty strange and cruel shit to Greg way before The Room starts filming.

4. Another thing I noticed is that the movie is far more “feel good” than the book. I honestly expected it to be a little more…out there. Don’t get me wrong, a lot of the really outrageous things I read about in the book showed up in the second half of the movie. On the other hand, the first half hour of the movie is pretty tame. We just see this budding bromance between Greg Sestero, who is depicted as this almost overly happy (but really fucking attractive) young guy, and the enigmatic Tommy Wiseau as this delightfully quirky weirdo. In the book, Greg is a bit more apprehensive and somewhat judgemental about Tommy’s intentions and behaviors. They’re great friends for sure, and Greg values that friendship, but he just seems like much more of a naive dork who was immediately accepting and unquestioning of pretty much everything about Tommy in the movie, whereas he was more skeptical and put off by certain things in the book. For example, he was not nearly as excited about Tommy’s script in reality. He thought it was terrible, but just didn’t want to upset Tommy. The film shows him being Tommy’s right hand man and #1 fanboy who was immediately supportive and enthusiastic. 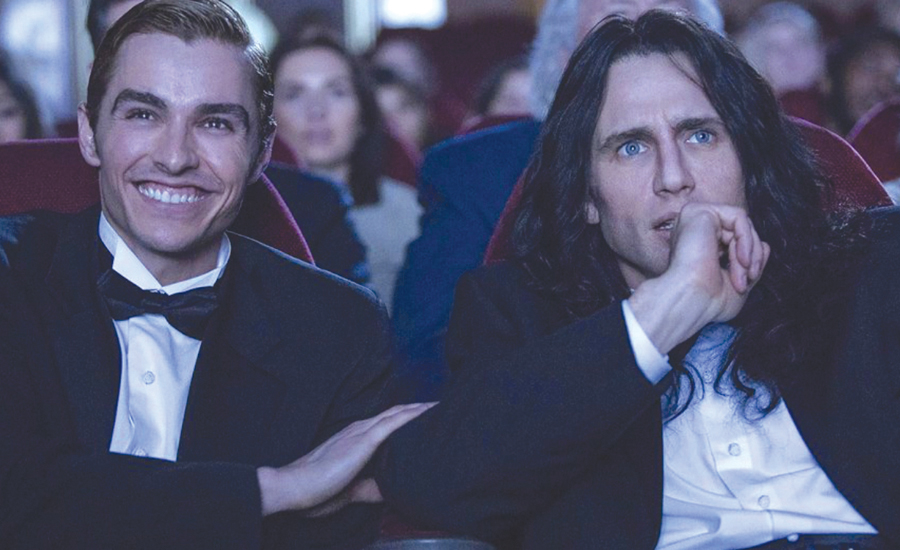 5. This is minor thing, but I wish the film had Tommy saying “Don’t be jealous” to Greg at odd times, the way he often did in the book. Missed opportunity for some good humor. Same thing with the fact that Tommy decided to put a bed in the audition room at one point when casting Lisa. This led many of the actresses to think that The Room was porn. There was a nod to this in the movie, but it wasn’t as funny or amusing as it could have been. Similarly, according to Greg’s book, many of the actresses declined the role when they learned they’d have to do sex scenes with Tommy. I supect that some of these things were left out because Franco wanted Tommy to like the movie, and so they avoided casting him in too negative a light. To be fair, the scenes that depict the making of The Room were bad enough (in a good way, where humor and entertainment are concerned).

6. Once the movie finally gets into the making of The Room, I think it did a great job depicting the way it was described in Greg’s book. Obviously they had to cut down and consolidate some incidents for time, but as far as I know from having read about them, it was pretty spot on and fascinating to watch. I never thought I could be turned off by James Franco, but his Tommy Wiseau was so convincing that I found myself cringing and captivated by his portrayal. His Tommy laugh was on point (ha HA ha), the accent was on point. It was just great. 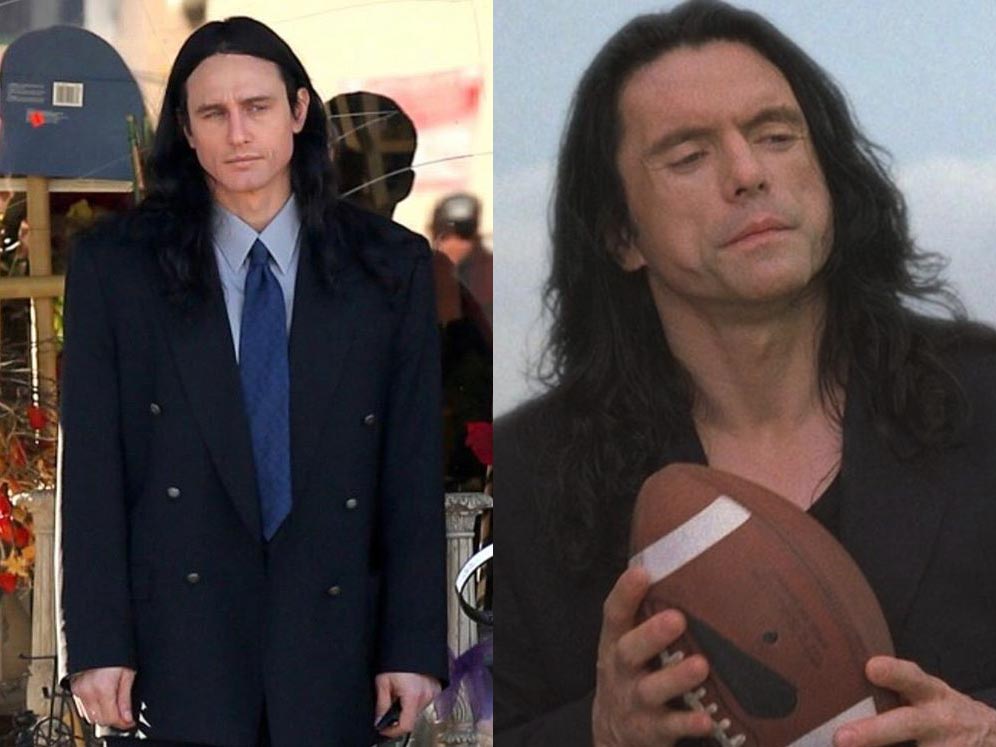 On the left is James Franco as Tommy Wiseau. On the right is the actual Wiseau. Impressive

7. The last thing I felt some type of way about was that the positive reception of The Room was nowhere near instant. In reality, it tanked at first before gaining its cult status. I understand why this wasn’t shown in the movie. Time constraints and all that jazz. Ultimately, despite the minor deviations from reality, the heart of it all appeared to be there. It was a tale of a friendship that led to the making of the best worst movie ever filmed. Equal parts bizarre, hilarious, and heartwarming.

Definitely worth seeing if you’re a fan of The Room and Sestero’s book.

PS: If you want all the juicy details about The Room directly from one of the film’s stars, or if you just enjoy reading really awesome memoires, I highly suggest you buy Greg’s book. I did, and I regret nothing. Link:
The Disaster Artist: My Life Inside The Room, the Greatest Bad Movie Ever Made

Insta?. Patreon?. Facebook?. If you liked this article, consider supporting my writing and cosplay work on Patreon! For just $1, you instantly get access to  exclusive content!

Post tags:
Disaster Artist
previous post
Streamer, Dr. DisRespect, Admits Cheating And Announces Break From Streaming
next post
We’re Shocked By How Much We Enjoyed Jumanji: Welcome to the Jungle

(GIVEAWAY – AZ) The Room In Theaters One Night Only!